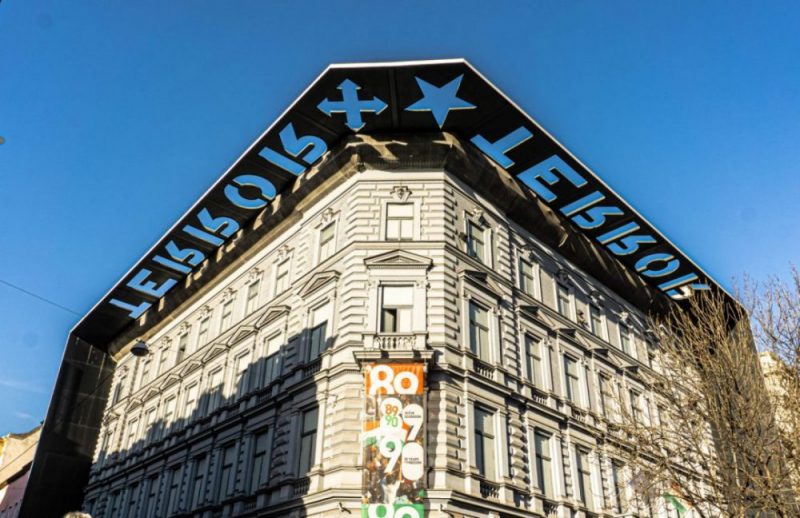 As a history major, the revolution of 1956 in Budapest was my favorite topic. I was so obsessed with it, that I literally bought every single book I found. Also, I watched every movie, every old record, everything that was available and I found out about it. This is the main reason of writing about the venues of the 1956 revolution in Budapest.

If you’re visiting Budapest, and you’re looking for a different kind of experience, you can follow these venues around the Hungarian capital, for a more history based type of trip!

As the 1956 revolution happened “just now”, its history is still living and really strong, if you know where to look for it! When you visit Budapest, you can visit all the below listed venues to learn more about this dark period!

Basically Hungary after WW II went under the rule of the Soviet Union. The first government, leaded by Mathias Rakosi was really cruel. In the communism they did numerous crimes against the Hungarian population. They took away their goods, their lands, they jailed people for no fair reason, and also executed many.

As in the communism everywhere, in Hungary as well they introduced a brand new, so called proletar dictatorship. It’s no need to explain too much that people hated the dictatorship forced on them. They lost their rights to vote, to speak, to go out when they want, to shop, to leave the country, and so on. Basically they lost all basic human rights.

You must know about Hungarians, that we hate to be ruled, and told what to do, and we love our freedom. That’s why Hungary’s history contains a revolution almost every century. We don’t want to be ruled by anybody, and that’s it. So this is the reason of the 1956 revolution as well. People wanted the soviets to leave, and to take back their freedom.

For a couple of years, I’ve been participating at an event organized in Budapest, in memoriam of the revolution of 1956. This event is called Gloria Victis. Between many others, this is organized by the Rakoczi Szovetseg (Alliance).

For a very long time, this was one of the most beautiful events I’ve ever seen! Every year, from all around the world the 56′ revolutioners came back home to Budapest, to participate at this event organized basically in their honor.

The first time I attended, I noticed that in the middle of the aula of the University of Tech and Economics in Budapest, where the main ceremony took place, there were many elder people. But I thought they just came for the same reason as me. Then, I found out that they were people who participated in the revolution of 1956.

In the first year, I didn’t had the guts to go there and speak to any of them, but the second year, I made sure to do it! I always loved when my great grandmother told me stories about the 2nd WW, and now to meet people who participated in the 1956 revolution, felt really amazing, and insane!

The story of the man I spoke to will be at the end of this article, so you can read it too! Until then, let’s see the venues of the revolution of 1956 in Budapest!

University of Technology and Economics in Budapest

Everything started in the aula of the University of Technology and Economics. There was a conference on the 23rd of October 1956 at the university, as they were preparing for the protest. Here, a student from the University of Szeged arrived, saying that they are ready to share their claims against the Soviet dictatorship and the Socialism. The students of the University of Technology and Economics straight away stood up and stand by the anti-socialist claims. They had a list of 16 points they were claiming for. Some of these are:

These are just a couple of the 16 points, and I tried to make them short and clear. Basically they wanted the end of the communism dictatorship with all its mess, and rules. Then, they removed from the facade of the aula the red start, which is a soviet symbol.

You can visit this part of the unviersity at any time. It’s the main room (aula) in the main building, on the Buda side of the Danube.

Demonstration on the 23rd of October – Bem Square

The university students marshed from the above mentioned University of Technology through the Freedom Bridge to the statue of Petofi (on Pest side). Here they students from other universities joined them. They have read out laud the 16 points of claims, and they continued their protest towards the city center in Pest, all the way to Margaret Bridge, and by crossing it, they arrived to the Bem Square.

This was a peaceful protest, where the workers that finished their morning shift joined the students for the protest. At the Bem statue, they read out again their claims, singed the anthem, along with some nationalist poems from the 19th century. To understand this, in 1848-49 there was another revolution in Hungary, just that time it was against the rule of the Austrian Monarch.

After the protest, people didn’t go home, but on some suggestions they started marshing to the Hungarian Parliament to ask for Imre Nagy to speak.

By 5 p.m. on Kossuth Square (where the Parliament is) about 2-3 hundred thousand people got together. At 6:30 the soviets turned off the lights on the square, hoping that this will make people leave, but they didn’t!

They lightened newspapers and they stood there, claiming for Imre Nagy to speak. Later on they turned back up the lights, and at 9:30 pm Imre Nagy appeared on the balcony of the parliament building, promising changes, and he asked people to go home.

The Kossuth square is also significant in this story, as on the 25th of October, when a massive amount of people, kids, elders, women gathered again to protest at the parliament. While they were protesting, the soviets opened fire on the civils, with guns and tanks as well…

It’s still not sure how many people died there (they estimate at least 1000), but it was the bloodiest event during the revolution. And basically this event triggered in the whole country to stand up and fight back.

I’m turning back with the story to the first day, the 23rd of October. While people were gathering at the parliament, a smaller group went to the Hungarian Radio to try to read in the 16 claims. Obviously the army, police, and the so called AVH – the soviet dictatorship’s militery police prevented the protesters to do it. However, 10 students did go in the building of the radio, while one was a 14 year old girl (who I have met at Gloria Victis).

They were trapped there for a longer time by the AVH. After 8 pm, the first gunshots roared, and shortly the people from the Parliament building arrived too. The siege of the building took up until the next morning, when the protesters managed to finally occupy it.

You can always visit the building of the Hungarian Radio from the outside and see where this fight took place. The reason I have mentioned this venue is because this event has to do a lot with the story of the man I’m going to speak about at the end of the article!

The Corvin neighborhood and more specifically the Corvin Alley was one of the central battle points in the city. Therefore, it’s one of the most important venues of the 1956 revolution in Budapest. There were two venues who were able to defend themselves for the longest against the Soviet army. One was the Corvin Koz (alley), and the other at the Szena Square (right near Szell Kalman Square on the Buda side). The fighters at the Corvin Koz managed to hold on until the end, to the 5th of November.

After the attack on the 5th of November, it wasn’t possible anymore to protect the alley and the cinema, so they had to get out from there.

This venue was one of the strongest in the whole city, and one of the biggest reasons I got obsessed with it isn’t just this, but because I read the memoir of the commander of this venue, Gergely Pongratz. You can find his memorial on the left side of the cinema’s building. He described the bloody fights they have had against the army.

The fact that kids, teenagers of 14 to 16 years, and obviously older ones were fighting there for their freedom, against an army is terrifying. I think this was shockingly heroic and respectable! Also, this is the reason I think this venue must be visited!

If you’ll walk all around the building of the cinema, you’ll see plaques with the names of the fighters, and their birth-death dates. You’ll find the teenagers there too…

The House of Terror is definitely the most memorable museum in Budapest! Take it from someone who’s been to all the museums in the Hungarian capital! This museum is the memorial of the dark ages of communism, socialism, and the revolution of 1956, in honor of those who suffered under these dictatorships.

The museum has four levels, each representing something else. On the second floor the permanent exhibition is following cronologically the history of the totalitarian dictatorship in Hungary. The first floor is about the ages after WW II, where you can learn about deportations from Chezslovakia, and the events in Hungary following the war.

On the groundfloor, you’ll see a tank, and memorial. There’s a documentation on the walls about all the victims of the dictatorship, and the revolution.

The basement though I personally not recommende for children! There are reconstructed cells showing how people were kept captive, beaten up, punished, and killed during the dictatorship. There’s also a room where are 6 replica scaffolds that were used for executions, and you can also see here records of such.

All in all, the House of Terror is a really memorable (and my personal favorite) museum in Budapest. If you’re not looking to visit all the venues of the 1956 revolution in Budapest, you should definitely consider at least the museum!

1956 events in Budapest: the short story of the man I’ve met at Gloria Victis

To understand the story of Sandor (Alexander), who I spoke to during Gloria Victis event in 2013, about his part played in the revolution, I need to clarify the historical facts.

On the first night of the revolution, on the 23rd of October 1956, the crowds went to the Hungarian Parliament, asking for Imre Nagy, to be the new prime minister.

In the meantime, a handful of people went to the Hungarian Radio, to try to get read into the radio the 16 claims. They got trapped their by the soviets, and the fights at the radio begun. It was obvious that the civils needed help against the armed soldiers, and police.

Sandor was the only one there who had a motorbike, so he got on it, went to the immense crowd at the Parliament to let them know what’s happening at the Hungarian Radio.

Basically, this is how the whole revolution started. People went from the parliament building to the radio to help those fighting there. And basically this is how it all started. One person getting on his motorbike, and going to the parliament to inform the crowds. A trigger, let’s say. And I got to meet him… I’m still so grateful!

22 Things to do in Budapest, Hungary

5 places for the best panoramic views in Budapest

Pin me: Following the venues of the 1956 revolution in Budapest

Looking for an accommodation in Budapest?

Don’t leave without your travel insurance!

Following the venues of the 1956 revolution in Budapest
Share It!
6
Shares
6
Shares