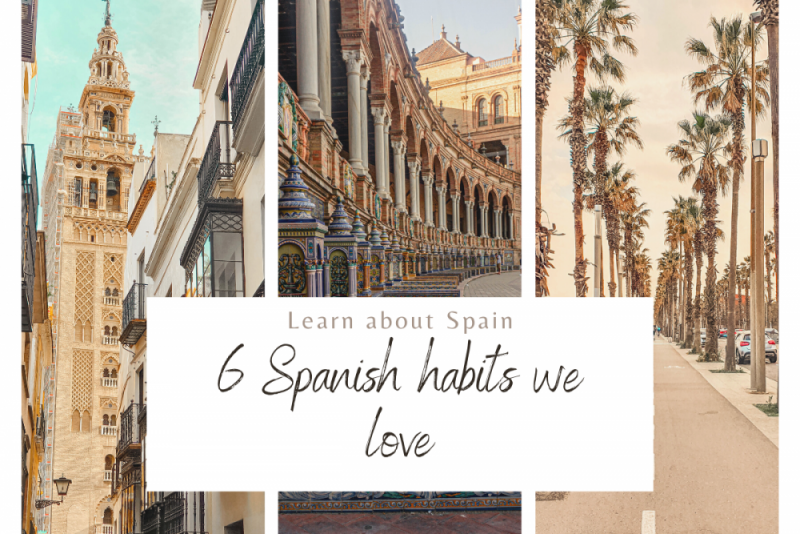 After Italy, Spain became quickly my second favorite destination in Europe, and also a topic I love to write about. Spain is at least as fascinating for me as Italy. The culture, arts, architecture, history, everyday life, music, food, drinks, and basically everything is just really close to me. After the Italian habits, now we’ll see those 6 Spanish habits we all really love!

There’s much more we can discuss when we want a list of why we love Spain, but these very common, deep-rooted habits that are part of the Spanish culture, the everyday life, these will be the topic now.

The siesta means an afternoon nap. This habit comes from the fact that the afternoons in the region, usually in the Mediterranean are insanely hot. Especially on the Southside of the countries. As Italians have their siestas, Spanish have theirs.

This takes place usually after lunch, during the hottest hours of the day. It’s practiced throughout the centuries mainly in the Mediterranean countries.

I don’t know about you guys, but if I’m sleeping during the day, I never wake up feeling fresh. If I want to have my siesta, I’ll wake up just like when you have a very bad hangover. Afterward, it’s no way I’d be ever productive at all!

However, while I’ve been in Andalusia in 2019, especially in Seville, I had to live with the habit of siesta, because the temperature was hitting 38-40°C by 1 pm. Instead of sleeping, I tried to find something productive to do, usually editing pictures or writing, while I was waiting for the temperature to drop.

It is impossible to be outside in that heat, and don’t even think of cold beers if you don’t want to get even more sleepy! Siesta is definitely a Spanish habit that everybody who loves relaxing and sleeping will enjoy!

The tapa is kind of an appetizer or snack, mostly designed for sharing. It’s something you can share indoors with family, but also when you go out, even to just meet a friend.

In the Mediterranean in usual, eating out with others is part of the culture. This isn’t something practiced in many European countries, as people tend to go out and meet friends just after they have already eaten.

Well, the tapas is great to share, and enjoy some delicious bits together with others. The tapas is basically small portions of all kind of delicious meals.

It can be hot or cold and can be combined to make full meals. What is very common in tapas, that each restaurant and tapas bar has some different courses, different mixtures depending on which area of Spain you are.

If you’re in a tapas bar outside of Spain, the selection really depends on the restaurants, and they usually mix different dishes from different sides of Spain.

So far, some of my favorites were the pollo boracchio (which means drunk chicken) and for those who love cooking, it’s really easy to prepare! Also love mushrooms cooked in butter, wine, lemon, and parsley. That is something incredibly amazing!!!

The croquettes are also very popular, made of pork, or chicken meat, or even cheese. Before I forget, a top favorite for many is the patatas bravas, which especially in Barcelona is really a top choice. This is usually combined with sausage or some other meat tapas.

Usually, when you go out with people to get tapas, depending obviously on how many of you are there, the tapas dish is always a smaller bowl, so for three people 3-4 types of tapas are usually more than enough.

A big reason why I loved Italy so much, and why I love Spain maybe, even more, is the social life. People love to socialize, be outside at bars, terraces, restaurants, and also to party. This is a really big part of the culture, especially within the youth.

Due to the climate, people tend to go out really late in the evenings, and the nightlife also starts pretty late (around 1 am). This makes the Spanish nights always full of life, and offers a great opportunity to enjoy them too!

Going out with friends, socializing, basically being outside, being open-minded and friendly with others, and having such a strong human connection is something that really really caught me in Spain.

People don’t really stay indoors. This is really different compared to the UK or other North European cultures. Spanish people rather socialize outside, on a terrace, in a restaurant, than hosting people in their homes. Obviously, they do that too, but that’s really not a priority.

Something is always happening somewhere, and people are always gathering. Even if that’s just some singing and guitar playing on top of a hill while watching sunsets, in a park, or on the beach.

The streets are full in the night, but like really full! I had no fear in a strange city walking home alone at 3 am, as the streets were literally invaded by people. I think this is amazing, and it’s absolutely for my taste!

I knew this about the Mediterranean already, but when I moved to England and met a few Spaniards, I did realize that this is something actually real. Spanish people, just like Italians or Greeks, are really chilled.

They are never in rush, and always taking everything easy (I don’t mean laziness here!!!). They hate to be rushed and stressed, and this is a true fact in every aspect of their lives!

Spanish people love to just enjoy life, do whatever they are doing, and feel great about that, at that moment. This is kind of the same with Italians and their Dolce Vita concept. The relaxed, chilled lifestyle is definitely one of those Spanish habits we really love!

I’m not sure what actually made them developed this mentality and attitude. Is it the climate or the Latin blood? The beauty they are surrounded by, or something else? Anyhow, life always feels better with this attitude!

Okay, this will be a hard one, as not everyone loves Spanish music. And I mean here all kinds and types of Spanish and Latin American music.

I’m however pretty sure, we can all feel that our hips start moving unwillingly as soon as we hear some catching Latin rhythms.

For me personally, their music works like a “positivity pill”. If I’m in a bad mood, angry, or just grumpy from the British weather, I listen to 1-2 songs/guitar plays and I straight away get into another state of mind. A much more positive one!

If we’re focusing just on Spain, the Flamenco is a really big part of their culture, especially down South. Playing the guitar, singing on the street, on the beach, in a park is part of the Spanish culture. And it’s just so fascinating! Music is part of life, of the everydays, and their music is one of a kind when you really want to feel those vibes!

Football is one of the most important Spanish habits nowadays, that I have to mention. This is something really cool, honestly!

Everyone’s love for football, and for their teams is just incredible. Even if it’s just an in-country cup, like the Copa del Rei, the stadiums are always full of people, and that passion we can notice is really interesting! Families go to watch games, taking Spanish omlette, drinks, and other food with them, gathering with other family members, or friends. I mean, what?

I did see this on first hand from a friend, who even has his team’s logo on his arm. His room is decorated with all kinds of stuff from his team, and let’s not mention watching a game with him…

That passion, anger, happiness, and disappointment I’ve seen on his face, was really interesting for me. For someone who loves football but not dying for it, this can be really surprising. I didn’t really know how to handle the emotional rollercoasters, but I did notice, that the same thing goes on in a stadium too. People would start even crying if their team is losing.

So about those Spanish habits

There are many more Spanish habits I could get into, and I actually did write about a couple of them, while focusing mostly on Andalusia, and the South of Spain. There are obviously many aspects that are really similar to many other cultures, but when you add the Mediterranean vibes to it, it’s kind of changing the game.

What is the Flamenco – Learn about Spain

Are there any other Spanish habits I have missed? Did you learn or see something in Spain that I haven’t covered here? Share it in a comment!

Pin me: 6 Spanish habits we love!